Escaping from the city life to experience nature in the wilderness and to get away from all the daily chores, is one of the greatest experiences ever BUT the need to cook and eat is inevitable.

There is something special about mealtime when you are camping – the food always tastes better! There are several methods for campsite cooking, but one of the best is cooking with a dutch oven. One-pot meals are my favorites, and a dutch oven for camping makes this easy. One of the easiest ways to ensure success with dutch oven cooking is to get a quality Dutch oven for camping.

A Dutch Oven is a large cast-iron pot. Simple. But, like most simple things, it is effective. It is very easy to cook with, and as you can get heat to the food from above and below, it works like an oven, hence called Dutch Oven; enabling you to stew, boil, fry, bake and roast.

There are of course, many different types of dutch ovens available in the market.

We will try to find you a perfect one by looking into their features, which should be considered while purchasing.

In my opinion, a cast iron dutch oven is the best type of cookware for camping. When properly cared for, it will last for ages. Due to its excellent heat conducting properties, it retains heat for a long time. The only drawback I can think of is that it is heavy!

There are enameled or marble coated cast irons are also available in the market but they might not be the most suitable for camping – as they are more likely to chip and does not withstand as high temperatures as regular cast iron ones.

A good camping dutch oven will have 3 legs on its bottom. This is great for cooking over hot coals. Otherwise, if your dutch oven lacks this basic feature, then you will have to take a tripod stand with you to keep it stable over burning coals or fire. Honestly, I think its important to be mindful about packing extra items in your camping and always try to minimize your burden and avoid taking any unnecessary stuff.

Some dutch irons available in the market comes with a handle which does not have a loop, so I don’t understand how are you supposed to take off lid without extra care and effort? Look for a properly sized handle and a loop in it.

One of the first things I check is the lid and how well it sits on the body of the Dutch oven. Make sure it is not too tight but also not too lose neither. One way to do this is to spin the lid while on the vessel. It should spin round freely.

Another option you will want to look for in a good camping dutch oven is a deep rimmed lid. This enables you to place hot coals on top of the lid without having to worry about them sliding off, ensuring more even cooking. You can also use it for cooking some side dishes such as potatoes, eggs or bacon, just about anything that does not need to be mixed with your one-pot dish.

When shopping for a dutch oven for outdoor use, size is a significant factor. The worst-case scenario is when you are cooking outside, and the Dutch oven is too small. This means that people get less portion sizes or you have to repeat the dish again. This is problematic as some of these dishes are slow-cooked for a couple of hours. You definitely don’t want hungry campers too, not great for the atmosphere!

To help narrow down the right size for your needs, consider how many people you’ll be preparing food for:

Check that the Dutch oven sits flat on a surface. The flatness of the base is crucial to it heating efficiently and evenly. If it is warped, it can create hot spots which may ruin some of your food.

The thin metal handle attached to the oven itself, which is called the bail should be strong enough and easily movable. It facilitates lifting the dutch oven onto and off the coals, using a metal hook.

Cast iron, as many know, do require some care and maintenance, but, most importantly of all, they require to use. After you use your cast iron cookware, it’s a good idea to do a light seasoning by putting a light coating of oil on your pan and then heating the pan up for a few minutes to maintain the seasoning on your pan.

Let’s now discuss the list of five best dutch ovens for camping that we have narrowed down through our research. 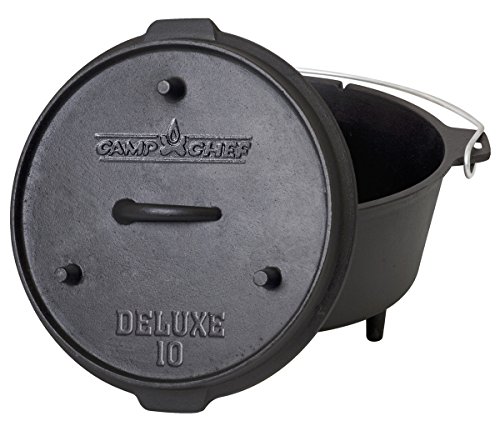 Camp Chef was established almost 30 years ago with the belief that there was a better way to cook outdoors. Camp Chef offers more than dutch ovens – they have smokers, outdoor ovens, griddles and more. They also have a National Park dutch oven/skillet set. The Camp Chef 6 Quart Deluxe Dutch Oven is one of the best values in camping dutch ovens. It weighs 16.88 pounds and has a nice round shape.

This 10 inch dutch oven is of great value if you are on a budget. It is approximately $20.00 cheaper than the Lodge dutch oven, plus it comes with a lid lifter and starter booklet. A neat feature of this dutch oven is the legs on top of the lid, making it easy to flip the lid and use it as a skillet over coals. 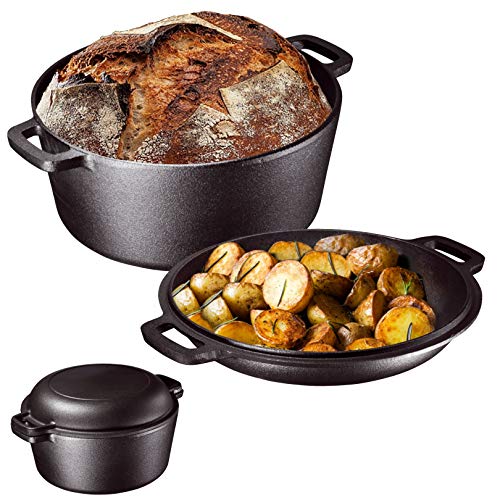 This Bruntmor dutch oven is an affordable option for your first dutch oven or even a second one to be able to cook dessert at the same time! It too has the deep, flanged lid. According to Bruntmor, their cast iron is pre-seasoned with their “Deep Seasoned Finish” that provides a natural, easy-release surface that is ready to cook on. It is also available in 6 quart and 8.5 quart models.

It’s got real lifetime durability thanks to its sturdy cast iron construction, but it also has some added perks including a domed iron cover which makes cooking roasts that is much easier and effective. 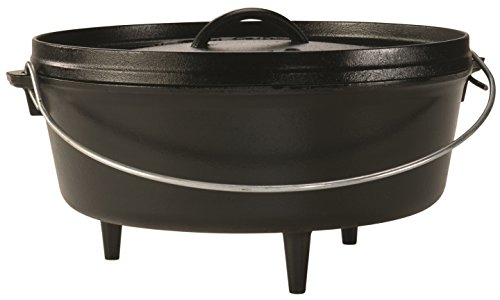 The Lodge name is famous in cast iron cookware. American made for over 100 years (first foundry opened in 1896 in Tennessee), their products have withstood the test of time. They manufacture a variety of dutch ovens in several sizes -perfect for individuals and large groups.

The 12 inch, 6 quart size is a great size for many campers. It is big enough for a family but not so huge that it is cumbersome to pack and carry. A 10 inch, 4 quart model is also available.

The original Lodge Camp Deep Dutch Oven is a cult – favorite, one of the very best dutch ovens for camping. It has all of the requirements for a good camping dutch oven – a flanged, deep lid for hot coals that does double duty when flipped and used as a griddle, a handle, and legs to hold it above the coals, and it is pre-seasoned cast iron. Weighing almost 20 pounds, it is deeper than other models, which is great for a large roast or ham and big batches of stew. It is also available in a smaller 5 quart model and a big 10 quart.

Made in the USA. Lodge has been making cast iron cookware in South Pittsburg, Tennessee (pop. 3,300) since 1896. With over 120 years of experience, their cast iron is known for its high-quality design, lifetime durability, and cooking versatility. 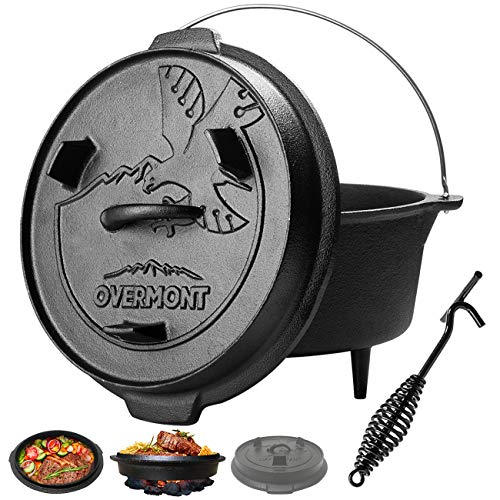 Known as a “lifetime pot” to many of its satisfied customers, the Overmont Camp Dutch Oven comes in two sizes and offers unparalleled durability which only a true cast iron Dutch oven can claim. It is made of high quality cast iron and will last a lifetime if cared for properly. It feels sturdier and holds up longer than a majority of the other Dutch ovens for camping on the market today. It’s an all-round pot and the integral legs on both pot and lid allow the oven to sit perfectly over the campfire; the lid can also be used as a skillet for frying.

Due to its considerable weight, Overmont equips a lid lifter for the Dutch Oven. The durable handle also allows you to hang it over the open fire.

You can choose and purchase any of the above five best dutch ovens for your camping trip and experience the great pleasure of cooking on an open fire. All of these are made of high-quality materials that will last a lifetime. We have scouted the best dutch ovens available on the market but if we have to suggest one from all mentioned above It would be Lodge Deep Camp Dutch Oven

because of its durability, sturdiness, fine quality, great size, and capacity. It provides great value for money and a worthy investment.

link to Is Fishing Line conductive?

You have a great fishing spot nearby and you are thinking of spending your next weekend there with your friends. All arrangements are done, and you are ready to go. However, one of your friends...

Continue Reading
link to Is Fishing off a bridge illegal?

The weather has been pleasant for a while and you are thinking of going fishing this weekend off a bridge nearby. Everything is planned and you are ready to go. However, there is one important detail...

LivingAmbition.com mission is to make all popular outdoor sport accessible, enjoyable and doable for everyone. You will find ton of information covering topics related to fishing, camping, backpacking, climbing, hiking and more...

We are a participant in the Amazon Services LLC Associates Program, an affiliate advertising program designed to provide a means for us to earn fees by linking to Amazon.com and affiliated sites. We also participate in programs from ShareASale, Maxbounty and ClickBank. Living Ambition is compensated for referring traffic and business to these companies.